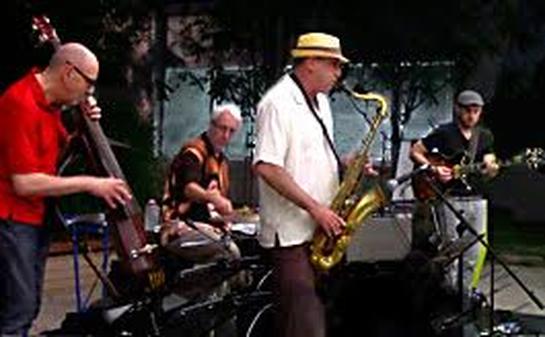 Vist Musician Website
Tenor Saxophonist // Scotty Silver, the founder and leader of West Side Jazz Club is a 4th generation New Yorker from the Bronx. Born in 1956, the son of Pearl and Seymour Silverberg, two avid Swing fans, the sounds and feeling for Jazz entered him at an early age. In 1980 he brought his sax to San Francisco and has blown changes around town ever since. In 2003 he formed West Side Jazz Club. Scores of musicians have passed through the “Club” with many of the relationships formed there lasting for years. Scottys' unique style resembles nobody so much as himself, with due influence from Archie Shepp, Sonny Rollins, Stan Getz ( also from the Bronx) and Wayne Shorter.

Bass // Carl Herder (bass) has done everything wrong. He quit his trombone studies at the Eastman School to play bass in a rock band. He has been pathologically unable to stay put in one genre of music, having composed and performed in musical theater of all stripes, been the only white guy in Reggae, Soka, Samba and Salsa bands; even done some Kulintang from the southern Philippines. Carl founded improvisational art music project Dogs Playing Poker in 2008. Most recently, he has established a reputation for injecting the unexpected into a shifting kaleidoscope of jazz agglomerations across the Bay Area.

Guitarist // Gary Zellerbach is a well-respected Bay Area guitarist and proud to be a fifth generation native San Franciscan. He received his first guitar on his 13th birthday and has been playing ever since.  Gary performs and records regularly around the Bay Area with musicians including Al Lazard, Gerald Beckett, Steve McQuarry, vocalists Laura Wiley, Beth Marlin, and Lynn Billig, and many more. Recent venues played include premier jazz venues such as Yoshi's San Francisco, the 57th Street Gallery in Oakland, the SFJAZZ Center, and dozens more clubs, restaurants, and private events.

Bassist // Karl Hartmann is fluent in many genres of music but is most at home in jazz. He began playing electric bass at age 10 forming bands with friends and eventually performing in rock and top-40 bands. After being talked into playing jazz (and having no experience doing so) in college Karl began studying music, jazz and learning double bass. From there he has branched out into all periods of jazz, from early swing to contemporary, Latin and Brazilian, Avant Garde and everything in between as well as Classical, musical theater, Blues and beyond.

Drummer // Daniel Bardenstein is a drummer, percussionist, and all-around lover of music. Hailing originally from northeast Ohio, Daniel has been in the Bay Area for 9 years where he has played with a variety of jazz, funk, and rock groups.