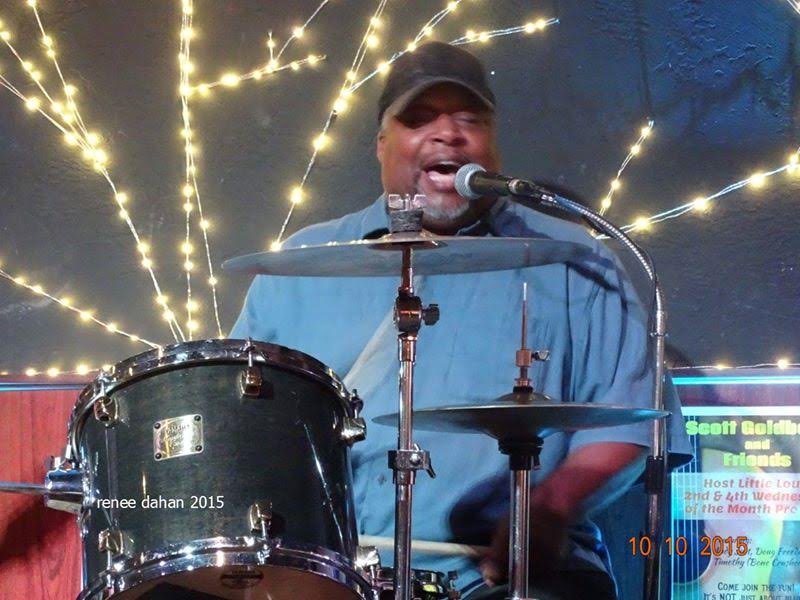 There are not enough words to describe this extremely versatile and talented musician, Dennis' musical journey started at age ten when he began playing drums live on the radio and church with his brother Myron Dove (Santana) and guitarist friend Oliver Harris. In high school he further his talent in a variety of bands in 1978 he picked up his roots and relocated to San Jose

Their band the Tear Magnets experienced considerable success and a critically acclaimed CD he continues to entertain audiences with his invaluable musical and personal spirit his efforts to promote live music are noteworthy' he nurtures other musicians by hosting a pro-blues jam at JJ's Blues the past 25 years with a powerful rhythm & style and organized fund raisers for hurricane Sandy & hurricane Katrina with other disaster victims. He has played live on the radio for a blues marathon and spends most of his time recording in the studio with various musicians releasing one of the best CD in Northern California.

| Oliver Harris | Guitar/Vocals |
He started playing at the age of 12 when Myron Dove showed him the chords
to a song he had written he took it from there learning popular songs off the radio and from his older sister record collection. He started playing live on the radio and Church this encompassed everything from Blues to Motown, his diversification continued when Myron came home with a new genre called "jazz-rock' which introduced him to the sounds of Chick Corea, Herbie Hancock and Stanley Clarke soon followed by Larry Carlton and Robben Ford. His love of these forms of music continues to this day, he still plays in numerous cover bands keeping music alive.

| Mike Pops Phillips | Bass/Vocals |
Pops' has been playing music his whole life daycare was spent in a music store where his mother returned to work after his father was sent abroad in the military. After a twenty year career in the high tech computer industry, Mike entered the music world as a bass player and hasn't looked back. Mike has been on the bay area music scene for over 25 years and has been  hired by the best in the business Rusty Zinn, Andy Santana, John Nemeth Chris "Kid" Andersen, Mighty Mike Schemer, RJ Mischo, Bob Welsh, Steve  Freund and played in the Charlie Musselwhite Band. Mike continues to nurture other musicians by hosting a pro-blues jam at Murphy's Law every Monday night and recording live in the studio.

| Frankie Ramos | Sax/Vocals |
He started playing as a kid, 50 years on the sax 'the man is just bad' open for Louis Prima in the late sixty's and in the early seventy's he has shared the same stage with Ray Charles just to name a few. Frankie plays hundreds of songs and the crowed goes wild. 'great entertainer'

| Johnny Cat | Guitar/Vocals |
He started playing guitar as a young man the blues made him famous with a  lot of well known bands, currently a member of the Terry Hanck band traveling all around the world. He plays a wide variety of styles ranging from jazz, blues and funk. He loves music in general always keeping the crowd up dancing it's great having him in the band.